Prolotherapy, also called proliferation therapy or regenerative injection therapy is a treatment of tissue with the injection of an irritant solution into a joint space, weakened ligament, or tendon insertion to relieve pain. The term Proli is Latin for “to grow.”

The most commonly injected irritant solution used is dextrose, which is another name for glucose (sugar).(1)

To understand why this is done, we have to look at the supporting structures of a joint. 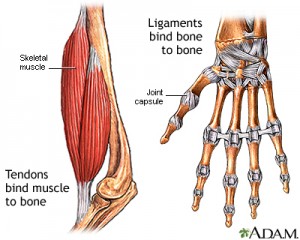 The body's repair process moves through 3 stages, all of which are triggered in succession of each other by prolotherapy.

The first stage is inflammation

This occurs through a brief AA (arachidonic acid) pathway of inflammation.(2) After an injury, the body uses primarily AA inflammation to try to repair the damage. With prolotherapy there is no significant damage, because there is no stretching or tearing of fibers, but the body still begins a repair process, which allows the structure to become stronger and tighter rather than first becoming weaker and looser. The inflammatory phase has a rapid onset (few hours at most) and swiftly increases in magnitude to its maximal reaction (1-3 days) before gradually resolving (over the next couple of weeks). It can result in several outcomes but in terms of tissue repair, it is normal and essential.(2)

The second stage is proliferation

The proliferative phase essentially involves the generation of the repair material, which for the majority of musculoskeletal injuries, involves the production of scar (type III collagen) material, although no scars are being produced by prolotherapy. The proliferative phase has a rapid onset (24-48 hours) but takes considerably longer to reach its peak reactivity, which is usually between 2-3 weeks post injury (the more vascular the tissue, the shorter the time taken to reach peak proliferative production). This peak in activity does not represent the time at which scar production (repair) is complete, but the time phase during which the bulk of the scar material (or in the case of prolotherapy, new collagen) is formed. The production of a final product (a stronger thicker tendon or ligament) is not achieved until later in the overall repair process. In general terms it is usually considered that proliferation runs from the first day or two post injury through to its peak at 2-3 weeks and decreases thereafter through to a matter of several months (typically 4-6) post trauma.(3)

The third stage is the remodeling phase

During remodelling, type III collagen, which is prevalent during proliferation, is replaced by type I collagen. Originally disorganized collagen fibers are rearranged, cross-linked, and aligned along tension lines. The onset of the remodelling phase may vary extensively, depending on the size of the injury, ranging from approximately 3 days to 3 weeks. The remodelling phase can last for a year or longer, similarly depending on the injury.(4)

Relevance to clinical outcomes
Due to the slow speed at which the body goes through these stages, especially the remodelling phase, full benefits of prolotherapy may not be realized until months after treatment occurs. While benefits may be seen in the short term, one should not be discouraged if the problem is not resolved immediately after the first treatment, as several treatments are usually required due to the nature of tendons and ligaments having a poor blood supply. Expect 3-5 treatments over the course of 3-6 months to truly judge a benefit from the treatment. Although some patients only require 1-2 treatments and see immediate results.

Iconic One Theme | Powered by Wordpress